An Anger Greater Than Mine

Note: Bob gets to show off some of his stunt expertise in this episode with some great riding sequences for Joe, along with exciting running mounts and dismounts and a heart-stopping fall at full gallop.

Both the High Chaparral and the Rancho Montoya are being plagued by an army of banditos. The leader of this army is Diego De La Paola, 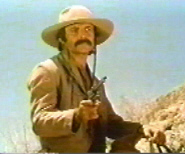 a former suitor of Victoria's. Diego's family sided with the Maximilinists during the war and when Juarez came to power, Diego went to prison.  All the De La Paola family land was sold off, to be purchased by Don Sebastian. Driven by his hatred for the Montoyas, Diego will not rest until the land is returned to him and both the Cannons and Montoyas are ruined.

Diego's constant attacks are quickly achieving their purpose. Fences are torn down and the cattle are driven off. So many ranch hands are being killed

that Sam has to double the wages of the remaining men to keep them all from leaving. Don Sebastian is suffering the same losses. The two ranches need to help each other catch their tormentor but the miles between them is too great. Then Big John comes up with an ingenious scheme that combines the way the Apache think with the speed of the Pony Express.

At his Pony Express station twenty-miles from Pedro, Joe sees the smoke and leaps on his horse, riding for all he is worth toward the Rancho Montoya. At another twenty-mile point waits a man with a new mount. Joe leaps on and takes off again. But Diego's men have guessed at this plan and someone is lying in wait. Joe is shot and falls from his horse. He has enough strength to fire his gun to attract some of the Montoya ranch hands, who ride on to warn Don Sebastian.

The Montoya forces, the High Chaparral men and Diego's army meet face to face. Diego, very cocky in his assured victory, hands Don Sebastian a paper to sign that will return Diego his family's property. But Don Sebastian has had enough. He leaps at the laughing man. Both sides watch as the pair struggle

and it is Don Sebastian who grabs Diego's gun.

In a fury, Diego orders his men to kill - he doesn't care about himself. But they know they are evenly matched and cannot win. They ride away, leaving the broken Diego on his knees in the dirt, crying out for Victoria to help him.

Click here to return to the Joe Butler page

Click here to return to the High Chaparral page